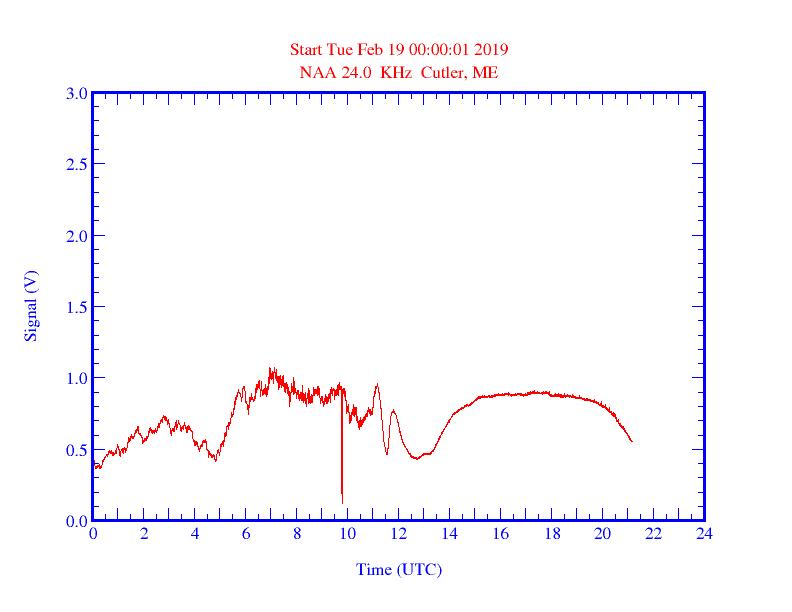 In the late 1940's, the U.S. Navy realized that they needed a high powered, low frequency, transmitter on the U.S. east coast which could broadcast to the North Atlantic and Arctic Oceans for communication with submarines. A radio transmitter was established in Cutler, Maine, for this purpose and it has been in operation since 1961. One fringe benefit is that this 1 million watt transmission at 24 kilohertz can be detected across the continental United States. The signal is very sensitive to the state of the Earth's ionosphere, because, at this frequency, it it is actually piped close to the surface of the Earth during the daytime. Several other VLF stations operate around the world, but Cutler provides the strongest daytime signal in this area.

In this installation the radio signals are received by a directional loop antenna tuned to the Cutler station. The receiver is located at Moore Observatory in Brownsboro, Kentucky. The receiver amplifies and averages the signal with a time constant of about 15 seconds and its output is recorded four times a minute by a 16-bit Galil RIO 47100 PLC analog-to-digital converter under the control of this server running Linux. The graphs are produced every 10 minutes with Grace.

Each day at 0 hours Coordinated Universal Time the data from the previous day are placed in the data archive, the latest complete plot is saved in the plot archive, and a new record is started.

Each plot should show a signal which varies erratically during the night, but is smooth and steady during the day. The transition at sunrise and sunset is a very distinctive rise and fall pattern. When a flare occurs, the prompt X-ray emission from the Sun modifies the ionosphere and produces a sudden enhancement in the very low frequency 24 kilohertz radio signal from Cutler, Maine.

Records of this type are kept by several amateur astronomers who coordinate their efforts through the American Association for Variable Star Observers.